After the obligatory partying and drinking that comes hand-in-hand with December festivities, pubs can be neglected places in January. Seeking a way to combat the loss of business that so often befalls pubs at this time of year, Greene King – the UK’s largest pub retailer, partnered with ODICCI to create a campaign to re-engage and acquire customers. 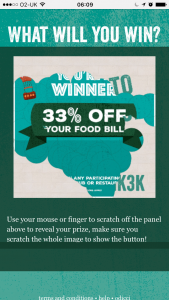 Greene King wanted a fun and engaging experience to both drive sales from existing guests and boost the acquisition of new ones. Knowing a thing or two about engaging experiences, we helped Greene King create an email marketing campaign, promoting a give-away that used a digital scratch and reveal, which included free meals, fitbits, and money-off vouchers. Participants could increase their chances of winning by sharing the campaign with friends, this allowed the campaign to spread far and wide and lead to a 25% increase on new email addresses.

Using ODICCI, Greene King were able to track engagement and view reports/anaylsis.   The campaign was a massive success, and won Greene King the ‘Best Use Of Multichannel’ award at The Dotties. Greene King gained 730k entries, 330k new customers and £700k associated sales. They also increased their brand awareness and market share.

Interested to see what ODICCI can do for you?